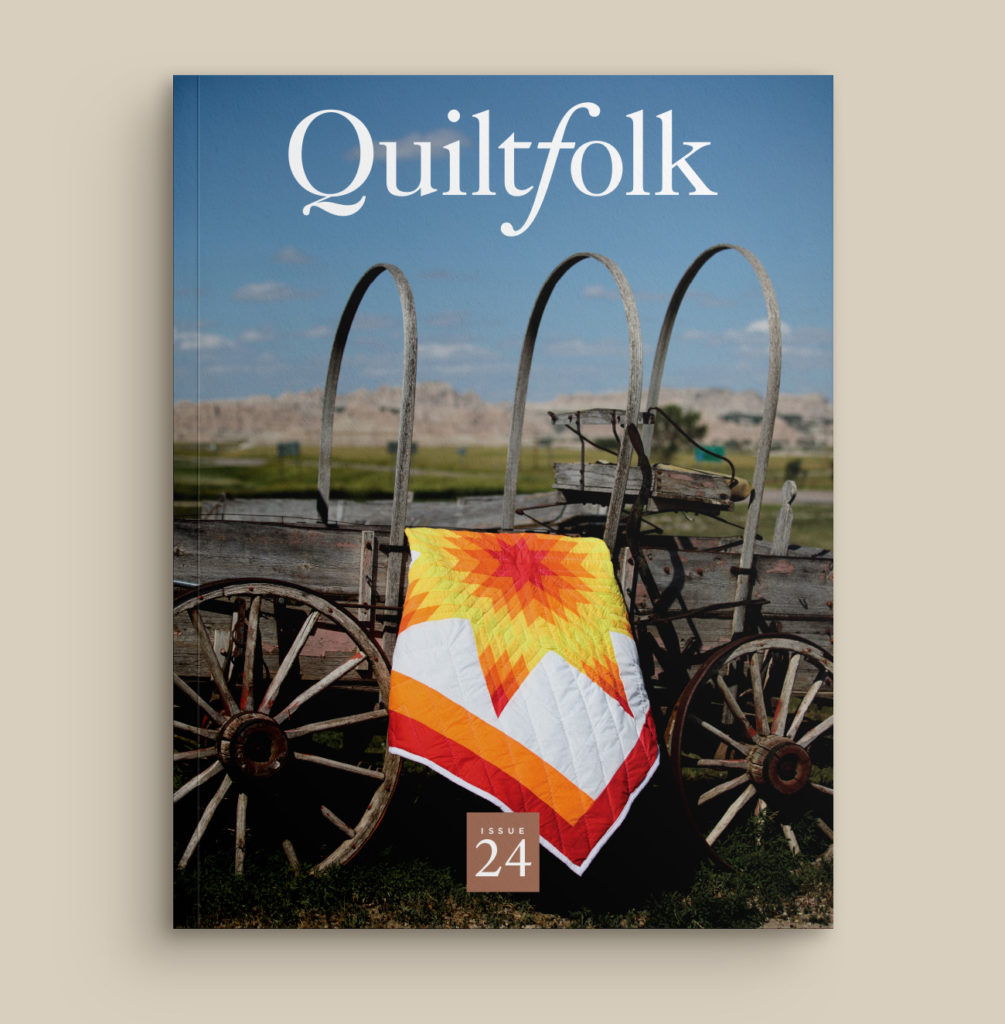 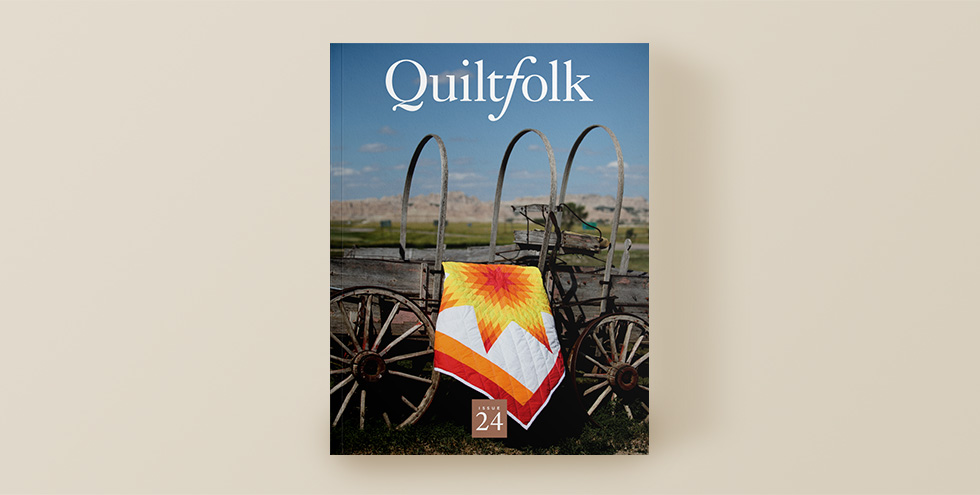 When the Quiltfolk team set out to explore the sweeping landscapes of South Dakota (or SoDak, if you’re in the know), we had some expectations. We knew we were in for some epic scenery, from expansive plains to the winding canyons of the Black Hills to the spikes of the Badlands. We also knew we’d find a deep well of history at the state capital in Pierre, with its trail of governors, and at the Crazy Horse Memorial in Custer County, or in the Wild West town of Deadwood. And we knew we’d find some interesting spots too. Who doesn’t want to visit a Corn Palace in a land where corn reigns?

What we didn’t expect was the wind. We had an idea of what it would be like, sure. But we were traveling in June, so we thought it wouldn’t be too intense, right? When we say we were “swept away” by South Dakota’s beauty, we mean that pretty literally. We certainly aren’t lacking in shots of quilts wafting in the breeze.

South Dakota officially became a state in November 1889, simultaneously with North Dakota. President Benjamin Harrison actually shuffled the statehood papers before signing them, so no one could tell which became a state first.

However, long before that moment, the Lakota and Dakota Sioux Native American tribes inhabited the lands, eventually becoming the area’s dominant population. It wasn’t until the late 19th century that European-American settlement intensified after a gold rush in the Black Hills and the construction of railroads from the east. Over the next several decades, South Dakota would struggle through major events like the Wounded Knee Massacre, the Dust Bowl, and of course, the Great Depression. Economic stability returned when the US entered World War II, and demand for the state’s agricultural and industrial products grew as the nation mobilized for war. In recent years, South Dakota has been transformed from a state dominated by agriculture to one with a more diversified economy, thanks to the considerable growth of tourism.

The state’s history is as unique and fascinating as its landscapes—and unsurprisingly, so are its people, who you’re about to discover on our pages. South Dakota has had many nicknames over the years, but our favorite is probably “The Land of Plenty”: plenty of history, plenty of views, and plenty of remarkable quilts and quiltmakers.

So come get swept away with us in the stunning state of South Dakota. 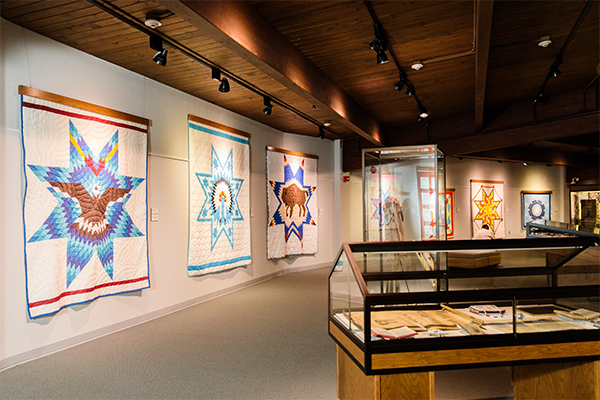 Aktá Lakota Museum Assistant Curator David Meyer jokingly said that when he mounts an exhibition of traditional artifacts, he typically gets a lot of questions. But when he organizes a quilt exhibition, he gets a lot of answers. That’s because local quilters know their stuff, and they love sharing their knowledge of quilting and how, as well as why, these quilts were made. 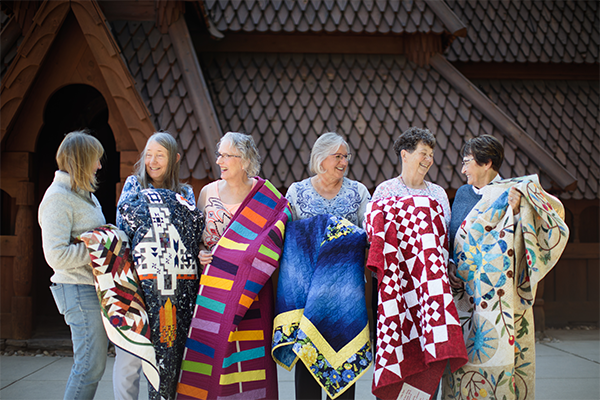 In the last year alone, the Black Hills Quilters Guild has donated over 300 quilts to organizations and members of their community. The guild focuses on community service and caring for the residents of their area. They prioritize taking care of each other too, all while doing the usual guild things. 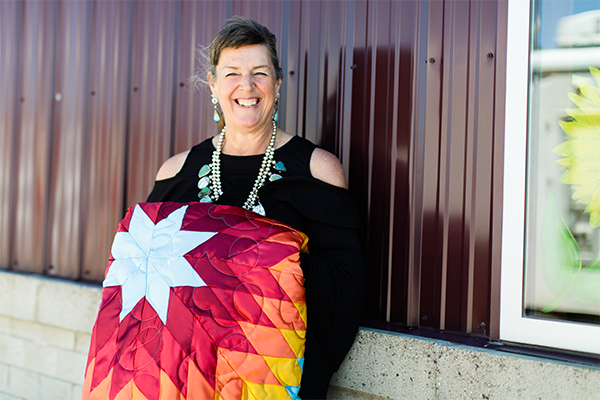 Ranchwife Vickie VanderMay has always been an outdoorsy person and only bought her first quilting machine to supplement income for her family of six. She never could have known that her first efforts to finish Star quilts for local Native families would turn into an operation that sells thousands of Star quilts a year, with about half the employees being incarcerated and formerly incarcerated women. Teaching quilting in prison has meant as much to Vickie as it has to the inmates, including several who are now free and still work for her. Last spring, South Dakotans had the chance to come out of quarantine to create with artists from The Barn Quilt Project: South Dakota Strong. This art-making and writing project traveled to nine communities, where small groups of all ages made beautiful barn quilt patterns out of fine art papers and wrote about their COVID experiences or wisdom gleaned from the pandemic years. The Brookings Area Quilt Guild hosts a biannual, outdoor Bloomin’ Quilt Party (BQP), where hundreds come from far and wide to admire quilts made by the guild. Member and guild VP Theresa Bennett hosts the BQP on her 20-acre property, and a good time is had by all. In the midst of a give-away preparation, Bonnie LeBeaux noticed about a dozen quilts strewn throughout her grandmother’s house, all at different stages of completion. It was at that moment that the process of releasing grief opened the door for her to gain a new skill. Today, Bonnie creates Star quilts that tell stories of family, ancestry, and resilience. New quilter Cassie Saenz turned to quilting after a period of many interstate moves, multiple stressors, and medical trauma. She’s recently settled in South Dakota and marvels at how quilting has changed her life—she’s gone from feeling hopeless to joyful. Now, she’s harnessing that energy to release the first of many patterns she’s designed. Read more of her story in Quiltfolk, Issue 24: South Dakota Dale Lamphere and Dignity of Earth and Sky

Sculptor Dale Lamphere isn’t a quilter, but he’s made one of the country’s most visible quilts. Composed of 128 stainless steel diamonds, the traditional Lakota Star quilt unfurls from the back of a 50-foot-high, 12-ton sculpture of a Native American woman outside of Chamberlain. Read about how Dale constructed one of South Dakota’s most famous landmarks, Dignity of Earth and Sky, with the help of engineers, auto experts, and yes, quilters in Quiltfolk, Issue 24: South Dakota. 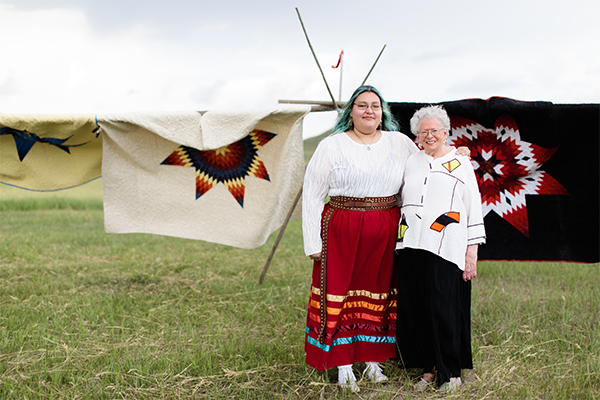 Giving away Star quilts to honor loved ones is a Lakota Sioux tradition, one that Margaret MacKichan has participated in since marrying her late husband, Don Moccasin, in 1987. Most recently, she made and gave away 75 quilts in honor of her daughter Jae’s high school graduation. Read about the origins of the Star quilt and how it still plays a role in today’s Lakota culture in Quiltfolk, Issue 24: South Dakota. For years, Mary Reecy Fitzgerald saw the vivid books from other states that resulted from organized quilt documentation projects, and she became determined to do that for South Dakota. After earning a master’s degree in quilt history, she spent years making that happen, geeking out on technique and stories and loving the obvious pride in the quilts that came pouring out of attics and off of beds. The book she produced is stuffed with treasures, tales, and photos of makers. Lori Holt and her daughter-in-law, Lora Holt, never shy away from a new creative challenge, whether that’s opening during a recession, moving locations four times, or keeping sales up during COVID-19 closures—the answer to the last obstacle comes in the form of pickle costumes and enthusiasm. 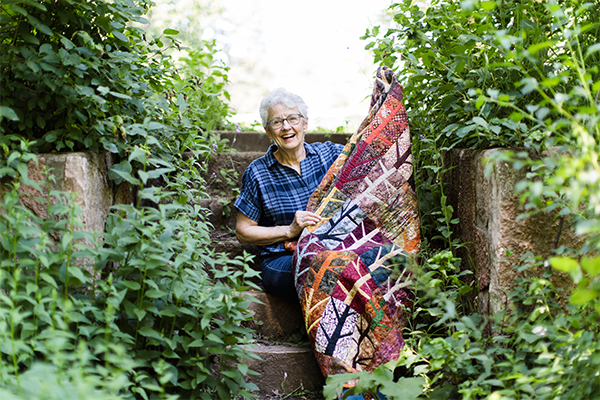 Tonna Zieske, the self-described “obsessive Black Hills quilter,” says she will try anything but keeps coming back to quilting. And she should! Her original landscape quilts are amazing, as are her “sofa” quilts. With only grade school art classes, she set out with a can-do attitude and no instructions to make her first quilt. Read about how her landscape infatuation began and where it’s going in Quiltfolk, Issue 24: South Dakota. 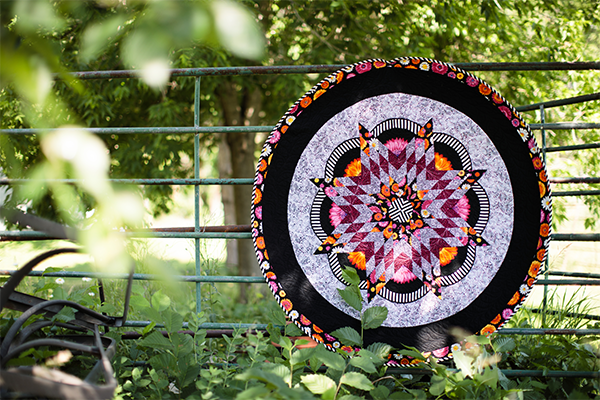 Most Native American Star quilters in South Dakota are of Lakota descent. But Vi Colombe, who has spent the majority of her adult life there, is an enrolled citizen of the Modoc Nation and a self-described “West Coast Indian.” She lives on a 2,000-acre spread on the Rosebud Indian Reservation, and she splits her so-called “free time” between mowing and sewing. Read more of her story in Quiltfolk, Issue 24: South Dakota. Brides-to-be, high school graduates, babies, and even athletes on the Rosebud Indian Reservation might be the lucky recipients of a hand-made quilt by Wilma Bear Shield Robertson or Lisa White Pipe. This mother-daughter team proudly gives away every quilt they make. The two women also make memorial quilts that are given to family members one year after the death of a loved one, following a tradition that Lakota people have been practicing for hundreds of years. Read more about their quilting practice in Quiltfolk, Issue 24: South Dakota. 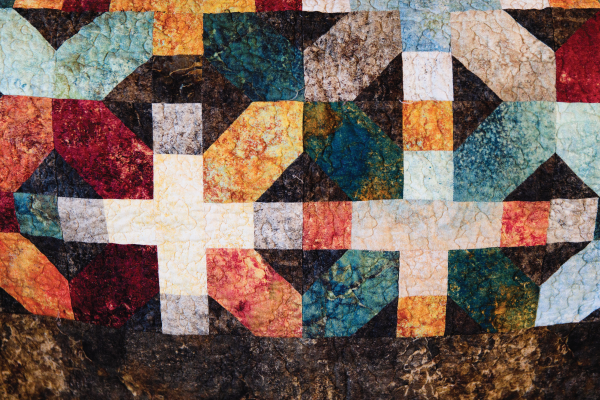